“A group of local artists really care about the sounds of our city. So much so, that they’ve placed them on display. For WBEZ, Michael DeBonis explains.”—Richard Steel, WBEZ host.
.

The opening on Tuesday night will include a live performance by members of the Chicago Phonography collective. More performances will take place over the course of the installation’s one-week run (July 21—26). The times and dates are listed below.

Chicago Phonography is a sound collective that performs with audio recordings culled from Chicago’s urban soundscape. Collectively mixing their recordings to leads audio electroacoustic dramas for the ear, or listening plays that can only be experienced in sound. The challenge posed by the Here/Not There series is in stretching something ephemeral — performance — into something more lasting. It explores how something can be experienced in one place and yet offer a sense of the experience in another, in this case, sound recordings made at the MCA and surrounding Chicago neighborhoods are contained with a continuous gallery installation.

Listen to Friday’s report about our show on WBEZ’s “Eight-Forty-Eight” Program.

The installation uses a computer driven video projection and a four-channel playback system designed by Brett Balogh to create a wall-sized 3-D cityscape. This visual rendering of downtown Chicago extends the environmental sensation of Chicago Phonography’s live sound performances into an experience of the immersive nature of sound itself, with its similar sense of chance narratives.

The installation will be on display at the McCormick Tribune Orientation space (12 X 12 Gallery) inside the MCA for the entire week, during regular museum hours, and live performances will occur on:

Additional performers and audio contributors will include:

More recordings of Chicago Phonography’s past performances are available on the Internet Archive. 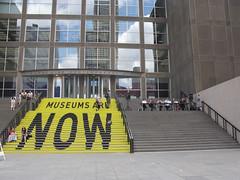 Past Chicago-focused projects involving recorded urban soundscapes include the Chicago Soundscape Project, led by Dawn and Lou Mallozzi in 1996. This unusual essay by Hans U. Werner, Sound Designer and Klang-Author for Radio and Television from the Westdeutscher Rundfunk (WDR) describes the effort, inspired in part by R. Murray Schafer and the World Soundscape Project. The ongoing Favorite Chicago Sounds, led by Jesse Seay and supported by the Experimental Sound Studio, uses the Internet has an open-access, public forum for soundscape recordings. FCS began in 2006 and is part of an international project started by Peter Cusack in 1998. The World Listening Project, founded in Chicago (2008), is supported by the Midwest Society for Acoustic Ecology to promote local, regional, and international projects in field recording and the awareness of a wide range of listening practices in relation to the environment.

Originally uploaded by giantmolecules.
This is Brett Balogh’s Flickr set of the install, opening, and today’s performance. Here’s the direct linked to the set below. Enjoy!

This site uses Akismet to reduce spam. Learn how your comment data is processed.